Perched above the rolling surf in La Jolla, California, The Salk Institute, revered around the world as a modern architectural treasure, was meticulously restored to reflect its original design. 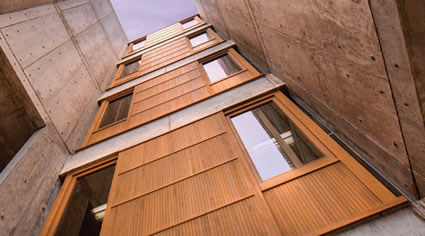 Restoration and construction is complete on the Salk Institute for Biological Studies, a masterwork founded by Dr. Jonas Salk, the developer of the polio vaccine, and designed by renowned architect Louis Kahn.

Built to house ground-breaking medical research, the restoration effort was led by the Getty Conservation Institute (GCI), which researched and funded the long-term conservation management of the complex that was commissioned in 1965.

During three years of research to prepare for the restoration project, GCI selected the Sansin Corporation to provide the durable, aesthetically-enhancing and environmentally-friendly finish for the Institute’s distinctive teak window wall assemblies, which are major features of the design.

Dr. Salk considered the La Jolla, California-based Institute’s design to be integral to its success. He sought to create a beautiful campus that would attract the world’s best minds to research topics that today include cancer, diabetes, birth defects, Alzheimer’s disease and AIDS, among others. Kahn’s design entailed two wings of laboratory, study and office space that mirror each other on either side of a central courtyard, with a view to the Pacific Ocean. The institute’s concrete construction is accented by the non-uniform appearance of 203 custom teak elements, which include sliding window panes, louvres and shutters.

In the course of its restoration research, GCI’s team discovered deterioration in the window walls due to a combination of mold, exposure to the elements and the effects of previous inadequate installation and maintenance efforts. Erosion was found to have impacted some window sills down to one-quarter of an inch into the wood.

GCI’s meticulous process to restore the windows included studying Kahn’s archived design documentation and performing DNA testing on wood to get replacement teak from the same region as the original. GCI tested many different protective finishes in roof top fence tests by placing teak wood samples on the roof to assess how they would perform in the exposed marine environment. As a result, Sansin was selected to supply its SDF finish to protect and preserve this historical landmark.

In 2006, the 27-acre site was deemed eligible by the California Historical Resources Commission and listed on the National Register of Historic Places.

SDF up to the task for marine environments

Sansin SDF utilizes specially formulated oils and resins that penetrate into the wood, providing outstanding weather and UV protection in a wide range of natural, semitransparent and even solid hide colors. Because SDF is designed to be highly water-repellent, it’s a natural choice for homes and structures in moisture rich and marine environments.

Future maintenance coats will be provided by Sansin’s Eos product.