Wednesday, 24 April 2019
The type of carpenter bees that homeowners have to worry about are large species (20 to 30mm) with a smooth and shiny, metallic blue-black abdomen (bumble bees have a yellow and hairy abdomen and do not bore into wood).

Making A Bee Line For Lumber

The type of carpenter bees that homeowners have to worry about are large species (20 to 30 mm) with a smooth and shiny, metallic blue-black abdomen (bumble bees have a yellow and hairy abdomen and do not bore into wood).

Large carpenter bees prefer to bore into fir, spruce, pine, cedar or douglas-fir, but are known to attack many other species.

WHAT IS THAT EATING MY LUMBER?
“I was impressed by reading your recent article on mold [The SANSIN REPORT, (October 1999)],” a Toronto customer told us over the phone, “but I am having another problem.”

He accused a “bumble-bee resembling bug” of eating into his cedar deck. This called for an on-the-spot investigation so we arranged for a visit in May.

WHAT WE FOUND
Our customer had enhanced his beautiful brick house with a lovely cedar deck looking out over a backyard full of flourishing plants and a few cherry trees.

The rafters of the deck were peppered with 17 insect holes, and it was not difficult to determine that the culprit was, in fact, THE LARGE CARPENTER BEE, one of the most common wood-boring insects in North America. Some male bees buzzed around us in an attempt to guard their “territory,” while females were busy moving in and out of the galleries.

The bees evidently enjoyed boring through this $5000 cedar deck — “whenever we are sitting out here, they fly around and threaten to sting us,” our customer related. “We have sprayed the holes with different liquids, but the bees just look mad and return a few days later, drilling even more holes in the deck.” He enthusiastically accepted our offer to use the deck as a field test for our eradication methods.

MOTHER NATURE’S MIRACLES
Mother Nature does not allow organic material to last indefinitely. Otherwise, we would soon be engulfed in a thick layer of the organic stuff and life on the Globe would die out, due to the lack of important minerals. Microorganisms are the main tool that Mother Nature uses to breakdown organic material. When she uses this “tool” to attack valuable lumber, we must protect it. One effective method is to keep the wood dry, because microorganisms cannot go to work without water. But, alas, Mother Nature has developed another group of creatures to devour organic material; namely, dry-wood insects. Most of the beetles in this group, such as the powder-post beetle, the deathwatch beetle, the long-horn house beetle and termites, feed and nest in dry wood, while others, including ants and carpenter bees, use dry wood only for nesting. Even dry wood insects need some water to propagate. They get it by devouring the wood. As each cellulose chain in the wood is broken apart in the insects’ stomach, a molecule of water is generated, producing enough moisture for the insects larvae to live happily in the dried wood. No one could ever accuse Mother Nature of lacking ingenuity especially if the wood is left unfinished. Outdoor structural timber such as porch and deck components, window sills, wooden sidings, eaves, fascia boards, garage and shed components are the most vulnerable; but carpenter bee galleries are also found in posts, transmission poles, timber bridges and dead trees.

After the bees mate early in the spring, they make a bee line for wood in search of a home for their “babies”. Females are usually very busy. Several generations may use old tunnels for many years, but most often are obliged to bore new ones. Male bees are not just couch potatoes. They fly around, guarding the nests. If a person or some other outsider shows up, they become aggressive, making rapid flights around the intruder and threatening to sting. Ironically, they have no stinger. The females have a stinger but are non-aggressive and will not use the weapons unless they are repeatedly provoked.

Upon finding a convenient location for a home, females begin excavating. They bore perfectly round holes about the size of a dime as far from the ground as possible.

Overhanging timber is a favorite site. Wherever possible the bees bore the holes on the bottom surfaces. They instinctively avoid areas that are vulnerable to water seep when it rains and prefer “sky highs” that are less attractive to ants, termites and other enemies. The main entrance to a bee gallery is oriented across the grain and is up to two inches deep. The bees then start tunneling at 90 degrees, along the grain, making the main, family tunnel. 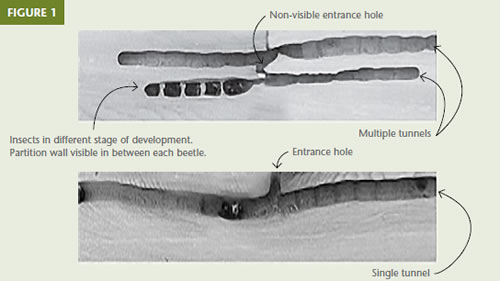 These are usually about one foot long, but can reach several feet, especially after years of use. Multiple tunnels are also common (Figure 1). If entry occurs through the end of board or log, there is no right angle turn; the bees simply make straight-line tunnels with the grain.

Once the gallery is ready, the female begins laying eggs, starting from the deepest end of the tunnel. She uses wood sawdust to cache walls between the eggs, so that each egg is partitioned in a separate chamber (Figure 1). When the larvae hatch, they feed on parental food (pollen and nectar based) and grow into juvenile (unmated) adults. They may emerge in the fall in search for more food, but return to the galleries to hibernate. Early in the spring, the adults emerge, mating follows and so the life cycle goes on. By mating time, the parents have died. One female delivers a generation of up to eight bees once a year. Some species produce two generations, especially in warmer regions.

DAMAGE TO THE WOOD
At first sight, the only evidence of attack are the entry holes made by the females. Damage is minor if infestation occurs only in decorative wood such as trims, fascia boards or sidings. If structural lumber such as in joists, windows, beams, shingles or logs is attacked, costly repairs are often necessary, especially after several years of neglect.

The presence of carpenter bees in wood sometimes attracts woodpeckers looking for larvae. The resulting damage can be extensive, especially when the hungry birds go after the bees from one chamber to another in the wood.

OUR TREATMENT
After we spotted the holes in broad daylight, we came back and monitored the insects at dusk as they were turning
in for the night. As soon as most of them seemed to have returned to the galleries, the action began. We saturated each hole with an aerosol type of insect spray containing 1% Diazinon insecticide.

As the treatment began, dazed bees emerged from the galleries, flew around erratically and fell to the ground, dying. By 11 pm, we counted 12 dead bees and found three more in the morning. After seven days, the score was 36. The aerosol spray treatment was then repeated. Finally, we injected a 100% solids, water free chinking compound into the holes and sealed them with tapered corks to retain the gases inside the galleries and to keep track of the holes that had been treated. The compound increases the kill ratio, prevents insects from re-entering, and keeps wood peckers away from the holes.

We made a final inspection in July 2000. No bees were observed flying around. After dismembering two joists to register the size of the galleries, we were surprised to find nine more bee carcasses in each joist (Figure 1).

WHAT YOU CAN DO
If bees are buzzing around, follow their flight to entry holes. Always inspect your lumber for the presence of holes at least once a year, preferably in the spring. Look for a sawdust-like frass that may accumulate on the surface below entry holes. If the frass looks like freshly sawed wood, the insects are probably still alive and active. Old frass is grayish in color. It indicates that adult insects have fled the scene and that mated females have probably not taken the same gallery to develop their own generation. Check for insect activity by placing folded paper (a tissue is suitable) into the holes and seeing later if it has been pushed out. Should eradication be necessary, make sure that the insects are back in the gallery at the time of action (if females survive, they will construct a new gallery). Modern (leadfree) paints and stains will deter the bees but not forever. Even pressure treated wood can be attacked (Henning 1999), so it is wise to apply wood stains.

Any insecticide that targets carpenter bees on the label can be used for eradication. Look for a product in a container with a flexible straw, so the liquid can be injected beyond the entry curve, directly into the main gallery. Powdered insecticides also do a good job.